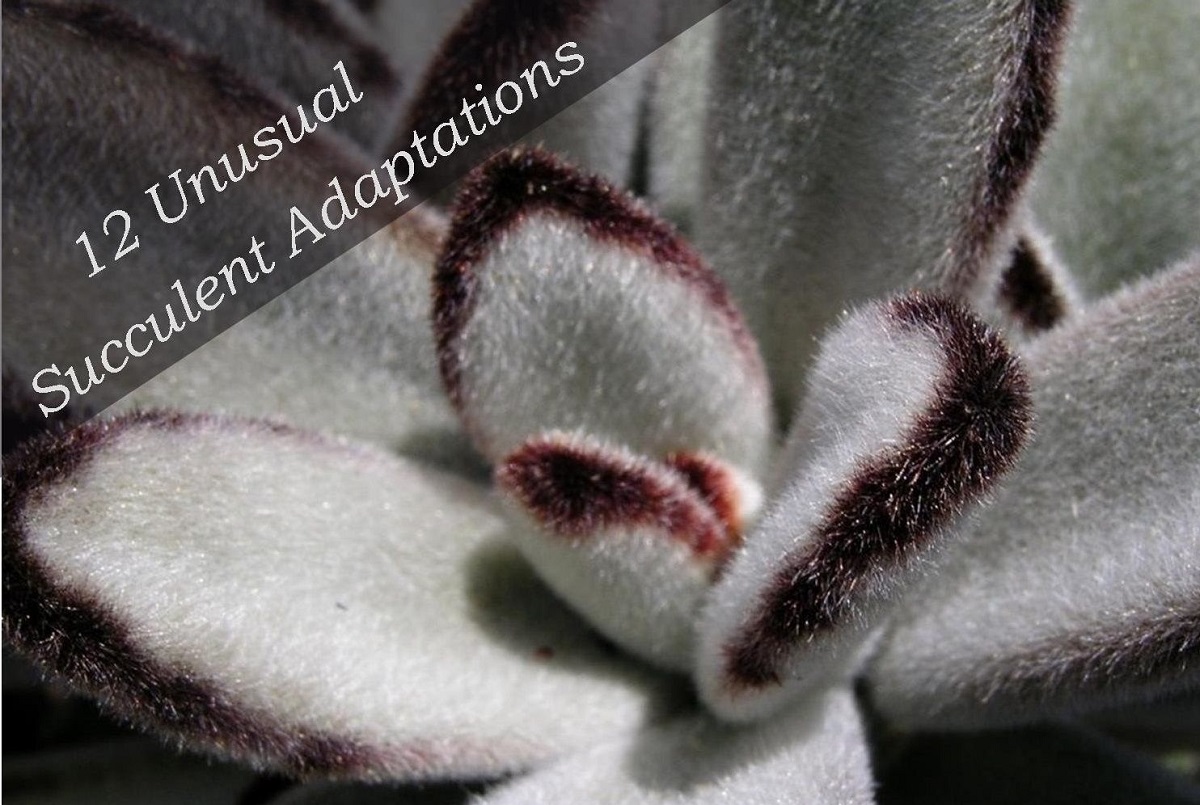 Some of the most notable features about our favorite animals and plants are adaptations to specific challenges in their native habitats. The giraffe’s insanely long neck allows it to feast from the tops of leafy trees. The elephant’s trunk enables it to eat enormous quantities despite its large tusks. All succulents are plants with special water-storage cells in their leaves, stems or roots for use during droughts. It’s a clever adaptation to harsh environments. But many have developed additional adaptations that are really strange. In response to insects, predation and scarce resources, some succulents have developed hairy leaves, rolling babies, pleated spheres and ways to grow underground! Often, it is the weird adaptations that we love most in our favorite plants and animals. So, let’s take a closer look at some unusual succulent adaptations and what they do.

We all love Echinocactus grusonii or golden barrel cactus for their whimsical shape and the bright golden spines that glow when backlit by the sun. The characteristic sphere is the shape that holds the largest volume of water for its size. This is a necessary adaptation in a water-starved climate. But it is not the sphere that intrigues me here, but the pleats. Do you see how these cactus are deeply pleated? This is because these plants have drawn down on their stored water supply. These “pleats” enable the cactus to swell with water without splitting. They capture all the rain in a cloud burst to store for future use. These cactus swell up to form perfect spheres. When the water is used, the spheres shrink and the pleats become pronounced. How cool is that?

Another unusual succulent adaptation that intrigues me is when plants grow hair. It almost seems to blur the line between plants and animals, doesn’t it? Especially when it is as pronounced as on the intriguing Echeveria Setosa. These white hairs are formed by specialized epidermal cells and serve several purposes. These hairs protect the vital stores of moisture within the leaves from both insects and herbivores. Isn’t it interesting that deer and rabbits don’t like to bite into furry leaves? The hairs also shade the leaves from the heat of midday sun and cut down on moisture loss. All important adaptations to a hot, dry climate.

Some succulents native to southern Africa have adapted to hot, arid conditions by forming “leaf windows”. These are specialized, translucent skin cells that allow the sunlight to penetrate deep inside the leaf, for photosynthesisPhotosynthesis (FO-to-SIN-thuh-sis) is the process plants us... More to occur inside the plant, below ground. This way, far less of the leaf’s surface is exposed to the drying sun and wind. These Fenestraria baby toes are each about 2.5 inches tall. Growing in their native habitat, all you see is the glassy-looking leaf windowsLeaf windows are specialized leaf structures specific to som... More barely peeking above the soil. Haworthia is another genus that often exhibits this unusual succulent adaptation.

Opuntia Cactus Hides from the Sun

Opuntia or the prickly pear cactus is an iconic desert plant. It has large, showy blooms and produces edible fruit. It is native to the hottest, driest regions of the United States, Mexico and Central America. But what interests me today are the iconic pads that make up the body of the prickly pear cactus. These pads or paddles are typically round or oval and grow from 4-16 inches long, depending upon the variety, and just 3/4 of an inch thick. Opuntia cactus typically align their pads east-west so that during the heat of the day, the sun shines just on the edge of the pad. This protects the bulk of the plant from the highest heat of the day.

Take this unusual succulent adaptation into account when planting opuntia into your garden, to avoid succulent sunburn. This lovely shot of the cold-hardy Opuntia Pinta Rita illustrates another, more common succulent adaptation that I just love! Succulents often develop bright colors in response to stress like excessive heat or cold.

Fuzzy Wuzzy Was a Panda Plant

The pettably soft Kalanchoe tomentosa ‘Silver Panda’ or ‘Chocolate Soldier‘ are popular with succulent lovers and kids alike, who can’t resist touching the furry leaves. Like the Echeveria Setosa above, these furry leaves protect their plant from insect damage and hungry (or thirsting) herbivores. Unlike Setosa, the hairs are very fine and very short, completely covering the leaves front and back and the stems as well. This soft, fine fur shields the leaves from blazing sun, preventing sunburn. It also protects the precious stores of water inside each leaf. Take care to water velvety, furry leafed succulents from below, rather than watering directly on top of the leaves.

Propagation is an important part of any plant’s life cycle. Like Sempervivum, Jovibarba pup generously, forming many offsetsSucculent offsets are the baby succulents that form at the b.... But how can so many plants be expected to share the limited resources where these plants grow? Jovibarba globifera pupsSucculent pups are the baby succulents that form at the base... remain tightly closed while they remain attached to the mother plant. In time, the stolonA stolon (STOLE-ehn) is a horizontal root, growing just abov..., or connecting stem, will dry up and release the baby plants. Tightly closed, they roll away over the hard-packed ground until they find a place to rest. At that point, the baby plants will root, their leaves will open to display the characteristic rosette. This unusual succulent adaptation enables the babies to roll away far from the mother plant and other siblings to maximize the use of resources. These charming plants are called Jovibarba rollers or roll-aways.

Agave Bloom in the Sky

Another propagation-related succulent adaption brings us to the extraordinary blooms of agave. Agave are tough, hardy plants that form handsome, rosette-like structures in the garden or desert. The foliage ranges from attractive to striking and is often edged with spines. The plants undeniably grow rooted in the ground, but their towering bloom spikes seem to flower in the sky. Agave Americana blooms typically soar up to 30 feet (9 meters) into their air. With flowers way up in the skyways, agave beckon to their favorite succulent pollinators ï¿½ bats. It’s an expensive proposition (from the perspective of a plant’s resources) to appeal to bats as pollinators, but there is an enormous payoff. A single bat carries far more pollen far further than an entire hive of bees can.

Wrapping up our trio of propagation-related succulent adaptations brings us to a very strange plant. Stapelia is a cactus from southern Africa with low-growing, spineless, bumpy stems. In time, these plants produce large, star-shaped flowers that in some varieties reach a full 10 inches across! One common name for the plant is starfish cactus. Wondering what is so strange about it? See those strange hairs all along the bloom? They combine with an odor reminiscent of rotting flesh to attract their favorite pollinators ï¿½ flies. This charming combination leads to Stapelia’s more common name ï¿½ carrion flower. Apparently the hairs are so convincing, that even Stapelia varieties without the roadkill stench will attract flies. Flies will lay their eggs beside a Stapelia bloom so their hatching larvae have plenty to eat.

From flies to spiders… Sempervivum are super cold-hardy succulents. All are hardy down to zone 5 (-15ï¿½F / -26ï¿½ C) and some are hardy down to a frigid zone 3 (-45ï¿½F / -40ï¿½ C)! One of the more curious (and creepy-looking) adaptations some semps employ is this spiderweb arrangement of fine, hair-like filaments called trichomes. Sempervivum arachnoideum or “cobweb sempervivum” gain a number of benefits. The cobwebs disrupt the airflow around the rosette, to keep the leaves from drying out. The tiny hairs crisscrossing the leaves prevents ice crystals from forming between the leaves of the rosettes. Finally, the cobwebs collect dew, causing it to fall along the drip line, thereby harvesting some moisture from the ambient air for the plant’s use.

Many succulents and cactus species have developed an unusual approach to respirationRespiration is the process where living beings, both animals... More. Like people and animals, all plants breathe. We take in oxygen and breathe out carbon dioxide as a waste product. With plants, this is reversed. They take in carbon dioxide to fuel their growth and release oxygen back into the air. This is one reason it feels so good to be around plants ï¿½ they refresh the air. Most plants respireTo respire - Respiration is the process where living beings,... More (taking in CO2 from the air and releasing oxygen back to the atmosphere) around the clock. But when they do respire, they lose a little bit of water in the process (just as we do). All Crassula and many other succulents have developed another strategy called Crassulacean Acid Metabolism, or CAM photosynthesis. They completely shut down all respiration during the day, when they would be likely to lose more water, and only respire at night.

(OK ï¿½ I admit there’s no way to show CAM photosynthesis. But I wanted to include this cool and unusual succulent adaptation. So I chose one of the very few stable monstrose succulents ï¿½ a Crassula ovata ‘Hobbit’. Isn’t he cute? Don’t worry ï¿½ more visible weirdness to follow!)

Lithops are one of the most unusual succulents to be found on the planet. Everything about this little gem represents an adaptation to the incredibly harsh condition in their native habitat. The plant forms just two leaves, with shape, coloring and markings to mimic the stones in its specific region. This highly effective mimicry cuts down on thirsty animals eating the plants. Like the baby toes above, Lithops form leaf windowsLeaf windows are translucent structures on the outside of  ... More, allowing them to photosynthesize below the surface of the soil. Even expert botanists struggle to locate lithops in the wild. Further, when a pair of new leaves develop, they cannibalize the mature leaves of the plant! These thrifty little souls resorb and reuse the stored nutrients and moisture of the mature leaves they replace. How’s that for an unusual adaptation?

I have saved the strangest succulent on this list for last:

Meet Cephalocereus senilis ï¿½ the old man cactus or white Persian cat cactus. (Personally, I think this botanical oddity looks more like Cousin Itt than a cat.) This bizarre cactus grows a tall, slender column that is covered by soft, silvery hair. This hair is a modified spine. But don’t try to hug this plant! The long hair covers short, sharp, vicious little yellow spines. Hardy just to zone 9, Cephalocereus can be grown indoors, but the hairs grow longer and thicker with full sun exposure. Outdoors, this slow-grower eventually reaches up to 45 feet and makes a striking addition to the landscape. The white hairs reflect the sun’s rays, cooling the plant in summer. It also traps air between the hair and the skin of the plant, insulating it from the cold in winter. It may also play a role in pollination when bats come to visit the enticing blooms.

I hope you’ve enjoyed this closer look at some of the weirder, wilder and more unusual succulent adaptations. Do you grow any of these varieties? I’d love to find out! Please take a moment to leave me a comment and let me know!

Because life is just better with succulents!

P.S. For more succulent information, please subscribe to The Succulent Eclectic! I’ll send you my FREE e-course,  7 Steps to Succulent Success. Thanks! 😉

Identifying Types of Succulents – with Pictures

12 Hanging Succulents You Can Grow (I promise!)