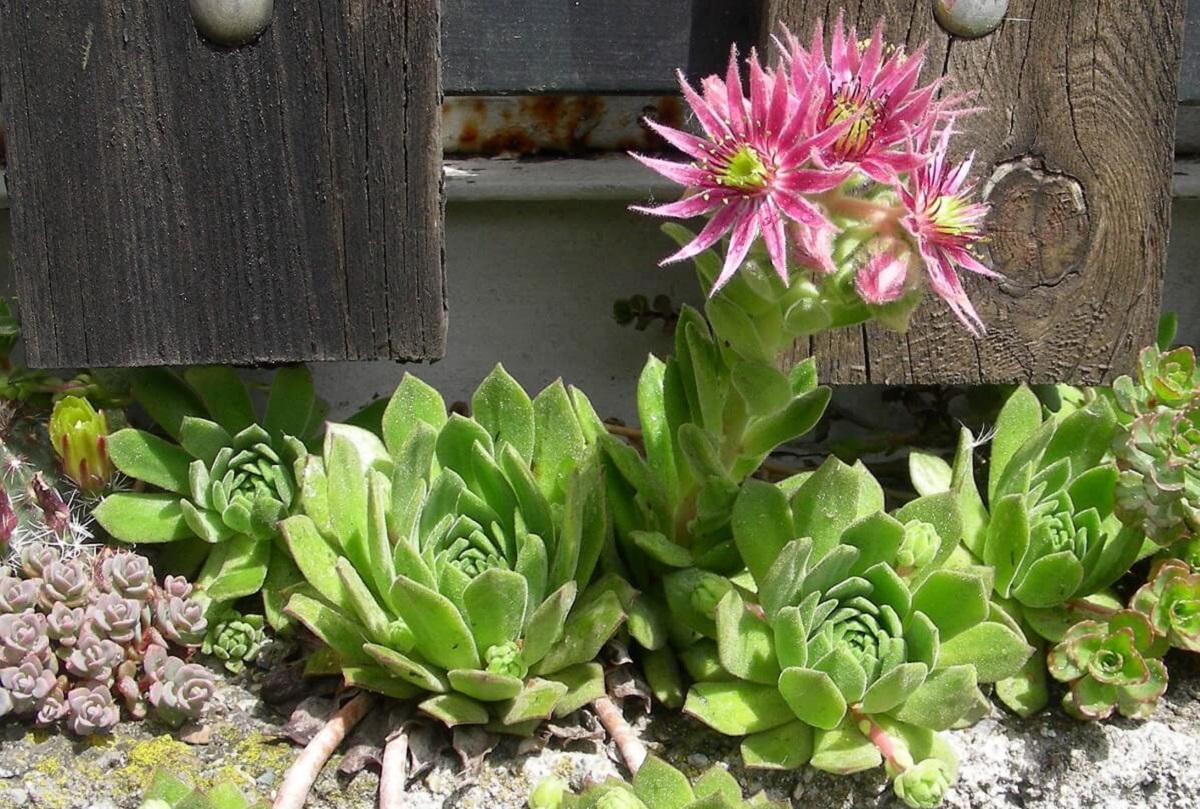 It’s so exciting to see your succulents bloom. Surely it is a sign of the plant’s health and vigor, right? But it never fails — someone comes along to whisper, in a horrified fashion, “Oh no — will it die now?” It’s a scary question, isn’t it? Do succulents die after blooming? The short answer is even scarier — yes, some do. But the long, in-depth and detailed answer (my favorite kind!) is this – not that many, and not really so much. What? There is a great deal of confusion over monocarpicMonocarpic (Mon-oh-CAR-pic) plants are those that flower, se... succulents – with good reason, in my opinion. Let’s take a closer look at which succulents die after they bloom, and just how dead they actually die. After the discussion below, look for my list of monocarpic succulents by genus.

There are a fair number of plants that flower only once before they die. Sunflowers and tomatoes are good examples. Each must grow, flower and set seed-bearing fruit just once before the plant dies. In these examples, this life-cycle is completed within a single year. But there are many examples of long-lived plants that grow for years, or even decades, before they finally bloom, with the plant’s death soon to follow. Perhaps you have grown a cherished bromeliad, only to know heartbreak when it suddenly dies after producing a single, glorious bloom. Plants with this life-cycle are called “monocarpic”.

Sempervivum are monocarpic succulents. When a sempervivum rosette blooms, it dies soon after the flowers fade. Every single time. This is true for all sempervivum, not just certain varieties within the species. If you just dropped $179 on a glorious selection of sempervivum for your garden – don’t panic! It’s going to be ok. I promise!

Does it seem strange that sempervivum — the plant whose name means always living — dies after blooming? How then can it be called “always living”. Let’s take a look. Remember that sempervivum are commonly called “hens and chicks” to describe the growth pattern of a large rosette-forming numerous smaller rosettes around it. A sempervivum “hen” typically grows for 3-4 years before it blooms. In that time, it creates many, sometimes many dozens of “chicks”, or smaller rosettes that surround the primary rosette. When the “hen” blooms, it does die. But your garden or container will not have a hole, because the many chicks continue to grow and thrive. In time, each of them will come into bloom, and it too will die, after first producing many, many chicks of its own. If you plant a single sempervivum rosette in a pot, and it develops into 14 rosettes that fill the pot to overflowing, you have not lost the plant when the original rosette dies.

Agave are the succulents most popularly understood to be monocarpic. Most people know that agave take many years before they form their extravagant blooms and then they die. Agave Americana, known as the century plant, grows 40, 50 or even up to 100 years before it blooms and then dies. What most people don’t realize is that only some, not all, agave varieties are monocarpic. And among those that are, most form multiple offsetsSucculent offsets are the baby succulents that form at the b... or “pups” either on the flower stem or at the base of the primary plant. These pupsSucculent pups are the baby succulents that form at the base... are baby plants that live on and thrive even after the mother plant dies away. While the seeds germinate, your agave’s young plants are growing in the place of the mother plant, sharing the mother’s same stem and root structure. So, does this monocarpic succulent truly die after flowering? In the case of agave, it seems that it is not always the plant itself that dies, just the main portion.

The vast majority of kalanchoe species flower freely over many seasons. Very few of them are monocarpic. The popular Kalanchoe luciae, and the nearly indistinguishable K. thyrsiflora are both called the paddle plant, or flapjacks. These kalanchoe species are monocarpic, in a manner similar to the agave. This photo by Camille Corbisiero Cappello, shows her Kalanchoe luciae blooming, after having formed multiple pups at its base. These pups will continue to grow and flourish long after the blooming portion has faded away.

Some species of aeonium and a few yucca varieties are also considered monocarpic. But here, the death-after-flowering story gets stranger. Aeonium and yucca plants branch beautifully throughout their lifespans, with each mature plant forming something like a tree. Each branch ends in a characteristic rosette of foliage. After years of maturing, some branches bloom, often singly, sometimes several at a time. These blooms form a dazzling display for months at a time. When the blooms are spent, that branch of a monocarpic aeonium or yucca plant will not grow or bloom again. However, the rosettes and growth points below the bloomed out branch continue to thrive, forming new branches and rosettes. In the case of monocarpic aeonium and yucca, it is not the entire plant that dies after blooming, just the individual branch.

The yucca in the image above has at least 12 different growing points, with one, on the right, beginning to bloom. If that single branch first stimulates additional branches to form below itself, and then dies after its flowers are spent, did the yucca plant die? Clearly not. Even without the new branches to be formed, just 1/12th of the overall plant will have stopped growing, while the rest continues to grow and thrive. Not all yucca are monocarpic, and those that are don’t really die after blooming. Monocarpic aeonium share this same branching growth pattern as yuccas. When a single, flowering branch fails, the rest of the aeonium continues to grow and prosper.

Below, I have compiled a list of succulent genera and divided them into monocarpic and polycarpic. If I found a single monocarpic species in the genus – it went into the monocarpic list. That is the only reason crassula or kalanchoe show up on that side of the list. Next, is shown how many varieties in the genus are monocarpic.

As you can see from this list above, most succulents are polycarpic, with multiple bloom seasons.

How to Stop a Monocarpic Succulent From Dying?

Is it possible to save a monocarpic plant from dying by removing the blooms? Sometimes. Like every other aspect of the monocarpic succulents topic, the answers are not always clear. While there is no way to stop a flowering sempervivum “hen” from dying, if you cut the bloom stem from a Kalanchoe flapjacks plant, you can often keep the plant alive. While we say a monocarp dies after blooming, it is in truth the seed production that triggers the death of the plant – to the extent that it does die. So some monocarps can be saved by removing the flowering stem. If you elect to try this, cut the stem while it is still in the bud stage. And remain vigilant! Some plants are so anxious to reproduce that new flower stems emerge after you remove the first one. Be sure to study the list above, so that you don’t needlessly remove the flowers from your echeveria, or any other polycarpic variety!

Do Succulents Die After Blooming?

So – do succulents die after blooming? Yes, some varieties do. But not that many, and not really that dead. If only it were like this for pets and beloved family members, right? Don’t fear growing and enjoying monocarpic succulents. They are beautiful and charming, and won’t leave you empty handed after they flower.

P.S. For my FREE course, 7 Steps to Succulent Success, please subscribe! Thanks so much!

P.P.S. Why not join my Facebook Group for succulent-lovers? We talk succulent care, propagation, identification and design. It’s a warm and welcoming group that would love to meet you!

Select Succulents to Suit Your Site