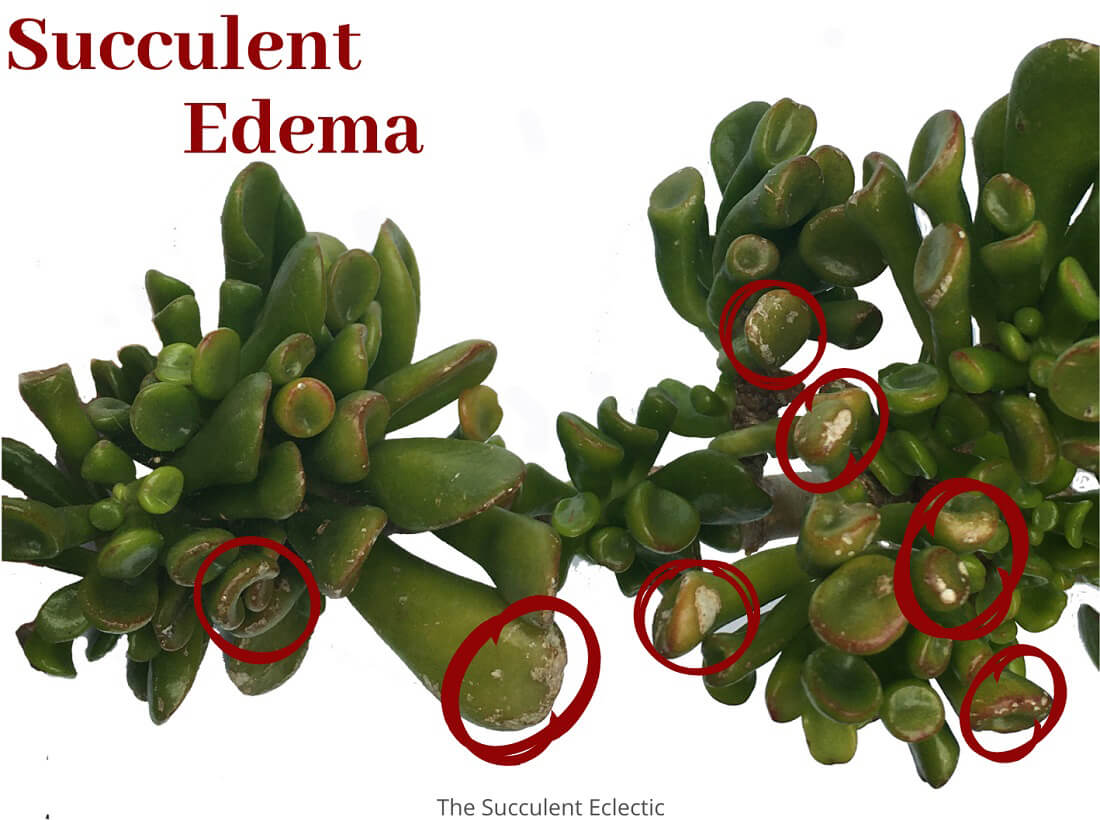 Whether you’re trying to diagnose brown spots on succulents, or you want to prevent them — you’ve come to the right place! A condition called plant edemaIn plants, edema (eh-DEE-muh) is a condition caused when a p... More causes rough spots, bumps or blisters on the leaves of succulents and other plants. These spots can be brown, white, red, yellow or black in color. Succulent edema indicates an imbalance in the plant that you want to correct, but it is not a fatal condition. It’s actually an early warning signal to correct your growing conditions to avoid more serious damage. By the end of this post, you’ll understand plant edema, how to diagnose it, and how to correct it for healthier, happier succulents.

Succulent Edema – a Common Cause of Brown Spots on Succulents

What is TranspirationTranspiration is the process of water movement through plant... More?

Plant edema is not a disease, but a disorder caused by an imbalance in a plant’s transpiration process. So first, let’s take a good look at transpiration.

Transpiration describes the process of water movement through plants. Roots draw up moisture from the soil, up through the stems and leaves, to every cell of the plant, eventually to be released through the leaves and stem. Transpiration distributes water, oxygen and minerals to all the tissues of a plant. This process is essential to a plant’s survival.

The water released by a plant’s leaves is in droplets too small to see. To get a sense of how much water plants transpire throughout the day, take a large zip-lock baggie and put it over the branch of a plant that is in full sun. Choose a branch with a lot of leaves that can be covered by the baggie. Wrap a piece of twine around the neck of the baggie to seal out the air. Leave the baggie in place for half an hour, then take a look at how much water collected in the baggie. It is the result of the plant’s transpiration. Pretty cool, right? Plants must transpire to live and grow.

What is Plant Edema?

Plant edema (eh-DEE-muh) is a disorder in the transpiration system that results in small scars on the plant’s leaves. The scars are typically rough, cork-like patches that are often raised like a blister. Typically small and irregularly shaped, they may also appear as white, yellow, reddish or black spots. Edema can affect a wide range of plants, including succulents.

Plant edema (sometimes spelled oedema) results when a plant takes up water through its roots more rapidly than it can process and release through its leaves. Unlike root rot, where roots drown and decay due to excess water in the soil, succulent edema results from healthy roots taking up water more rapidly than the leaves can release it back into the atmosphere. And unlike badly over-watered succulents, where all the interior cell walls burst from way too much water, edema affects a few cell walls near the skin. It is likely that these cells were already weakened or possibly bruised before the conditions that lead to edema were encountered.

Succulents differ from other plants in that they store excess water for the plant’s future needs. They have evolved to take in more water than the plant can process. When you see signs of succulent edema, it is the result of that transpiration and water storage system becoming imbalanced. When this occurs, the excess water builds up pressure that stretches and collapses the cell walls within a leaf’s skin causing irregular bumps or blisters. Edema is the likely cause of small, rough and irregular brown spots on succulents.

Conditions that Lead to Succulent Edema

Plant edema results from roots taking in water faster than the leaves can release it back to the environment. But what conditions cause this to happen?

Environmental conditions like air and soil temperature, humidity and air circulation affect the rate, efficiency and balance of transpiration:

The most common cause of succulent edema is too much water in the soil coupled with a cool or humid atmosphere.

There are a number of possible causes of brown spots on succulents, primarily succulent sunburn, insects or insect damage and plant edema. So how can you tell which is which?

Edema scars can look similar to the damage done by thrips or spider mites. One of the members of my Facebook community for succulent-lovers suggests adding a jeweler’s loupe to your succulent tool kit. It’s a terrific idea! The powerful magnifying glass will show you whether the brown spots on succulents have legs, or whether they’re a defect in the skin, which would indicate succulent edema. (Just in case yours does have legs, or you find pests hiding between the leaves, learn how to treat and prevent succulent pests).

The loupe isn’t needed to distinguish between sunburn and edema — you’ll see that unaided. Sunburn tends to occur over a broader area, and specifically on the parts of the plant exposed to the most sun. Sunburn is typically flat and relatively smooth where edema scars are often raised like blisters. A sunburned leaf will typically have a single swath of brown, burned skin. While multiple leaves might be burned, you won’t see multiple burns on a single leaf. With edema, it may be a single, small scar or a bunch of separate, little scars that form seemingly at random. Edema blisters can also occur on the underside of the leaf, while sunburn, of course, is always on a surface facing the sun.

It’s important to remember that plant edema is not a disease. It is not bacterial or viral in nature, and it is not contagious. It is an injury, not a sickness. It is also an important signal about your succulent’s relative health and growing conditions. Edema marks are permanent scars. There is no way to remove them other than removing the leaf, but they don’t prevent your succulent from growing large and lovely. Eventually, your plant will outgrow the scars — if you correct the conditions that led to the edema in the first place.

The solutions for succulent edema look a lot like excellent succulent care:

Follow the practices above to avoid or correct succulent edema. If you do notice brown spots on succulents, and determine they are edema, decrease the water you provide and increase both light and air circulation.

I know this was a rather dry post, but now you know what to do when you find brown spots on succulents (or white, yellow, red or black). Armed with this knowledge, you’ll be able to correct succulent edema when you find it, or better yet — prevent it! If you have any questions on the subject, please leave me a comment. I will get right back to you!

P.S. For more great succulent information, please subscribe to The Succulent Eclectic! I’ll send you my free e-course, 7 Steps to Succulent Success! Thanks!

P.P.S. Why not join my Facebook Group for succulent-lovers? We talk succulent care, propagation, succulent identification and design. It’s a warm and welcoming group that would love to meet you!